I have a bit of a love affair going with Darjeeling teas. I typically make a black tea in the morning to take to work with me, but with Darjeelings, I usually wait till afternoon or evening to brew them up. They're just not really an early morning tea for me, but they make a great "unwind in the evening after a long work day" tea.

This is a newer offering from What-Cha, just harvested a couple months ago (July 2015). A smooth and fruity Darjeeling with a zesty taste of orange blossom combined with a brilliant muscatel finish. A very special tea from Darjeeling, produced exclusively from the original 130 year old 'China' bushes, originally used by the British Empire to setup India's tea industry. These bushes have been largely replaced by assamica throughout India with the exception of Darjeeling, where some of these original bushes survive.

My thoughts
This is a second flush, so it's much darker than the typical light-and-fruity first flushes. It's also from the Gopaldhara Tea Estate, which is a big plus in my book. What-Cha lists it as a FTGFOP1 grade (Finest Tippy Golden Flowery Orange Pekoe). With a grading that big, it has to be good. 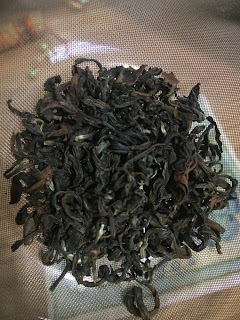 Dry leaves - You can tell it's definitely a Darjeeling just from the aroma. I am immediately met with a fairly strong scent of malty muscatel grapes. It's a bit more floral than other late flushes I've had, which can only be a good thing. The leaves contain a few silvery tips and a few lighter brown leaves. 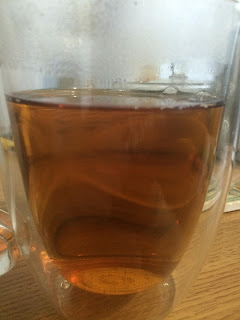 Right up front, I'm met with the zesty orange blossom taste that What-Cha describes. My initial impression at first sip is that it's almost like an Oriental Beauty oolong, but that feeling quickly fades as the flavor turns to the smooth, malty, muscatel profile I expect from a Darjeeling. The muscatel element is very prominent, and lingers for quite a long time after the sip.

Second steep, the flavor hasn't altered much, but I do notice a bit of a honey taste alongside the muscatel. It's subtle, but it's there. The orange blossom component has faded somewhat as well. Third, fourth and fifth steeps are mostly the same. I was hoping that the honey taste would get stronger with later steeps, but it never really got past the little subtle twinge.

Regardless, this is a very nice tea. Not my absolute favorite Darjeeling, but it's an easy top 5. This could definitely be a daily drinker, and because it's a second flush, the price is lower than many teas from Darjeeling (50g for $10.82).

You can buy this tea at What-Cha here: http://what-cha.com/fresh-summer-harvest/india-darjeeling-2nd-flush-gopaldhara-china-muscatel-black-tea/